Six months ago, I launched Keith Ablow Creative, in hopes of bringing my expertise in writing, producing and launching new businesses to others.  I didn’t know what to expect, of course.  New ventures have an inherent element of uncertainty.  That’s part of the fun, actually.

Far more has happened than I could have imagined.  One person and one company after another has reached out with worthy ideas that we have teamed up on.  And the results speak for themselves.  Here’s a sampling: 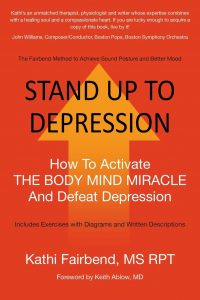 I teamed up with a wonderful healer and writer Kathi Fairbend, MS, RPT to create and publish her new book, Stand Up To Depression: How to Activate the Mind Body Miracle and Defeat Depression.  Ms. Fairbend, one of the nation’s top physical therapists, makes the very important case that one’s posture can signal the mind that a person is moving forward in life, not giving up, and can actually help conquer depression.  John Williams, Composer/Conductor, of the Boston Pops and Boston Symphony Orchestra said of the book, “If you are lucky enough to acquire a copy of this book, live by it!”  And Donald Ingber, MD, PhD, the Founding Director of the Wyss Institute for Biologically Inspired Engineering at Harvard said, “In essence, Kathi offers a potential escape from the downward spiral of depression.”

I teamed up with brilliant new recording artist Ohana Haas to find a production team to create and release her first album,  The Broken.  The album was produced by recording artist and PR guru Christian Josi, founder of Slay Media and top-flight musicians, at Manhattan’s historic Pyramid Studios

I teamed up with Jack Cunningham, a decorated Marine veteran, to develop a scripted television drama called Combined Action, a drama series based on the Marine Combined Action Program (CAP) during the Vietnam War. CAP placed Marines inside South Vietnamese villages, living alongside villagers, as their friends and protectors, for long periods of time.  This counterinsurgency program was extremely effective at maintaining allegiances with the South Vietnamese, but it was very dangerous.  CAP Marines not only had to worry that their presence made the villages prime targets for the Communist North Vietnamese, but also that those they were living alongside might turn out to be the enemy or, if not that, might abandon the village if fighting got too rough.  They also had to live with the possibility that, when they left the village after a year or more, the village might be quickly overrun and burned to the ground by the North Vietnamese.  This is a drama series about emotional connections between Marines and Vietnamese villagers, with humor, drama, intrigue and pathos.

IT’S TIME TO TELL THE STORY OF CAP MARINES

We’ve got lots more happening at Keith Ablow Creative and I can’t wait to share more soon.  If you’re passionate about it and want to team up on it, I’m all ears and I’m driven to make what you can imagine become a reality.